Where is the price of gold heading? We can see from the below monthly chart of gold as at 10 September 2014 that gold has been in a sideways range for just over a year since it broke the prior swing low in April 2013.

At 29 June 2012, (read below) we had an expectation that gold could have had a high possibility of continuing to move higher from that point onward if it held above the monthly swing low level of $1,510.00. As the 60 year cycle indicated bullishness and the US Dollar was showing major weakness.

Now as of today, the 10th September we have experienced a huge bullish reversal of the US Dollar over the prior two and a half months indicating the US Dollar is not in any near term danger of collapsing.

This now means that the price of gold has downward pressure on it towards the levels of 1184.00 and 1210.00 area. If the 1184.00 level is broken to the downside, it could cause gold to lose more of it's value rather quickly. (It should be noted that the 1184.00 level indicates major support as a possible triple bottom formation and 1210.00 is a natural square level also indicating possible support).

Notice how price has moved below the prior months low of August. WD Gann said that once a prior month low is broken to the downside it signals weakness in the price. So from here onward it's a bit hard to tell which direction gold will move. I certainly would not want to be a gold buyer right now as price has a very high probability of moving further downward to test the 1210.00 to 1184.00 price zone. 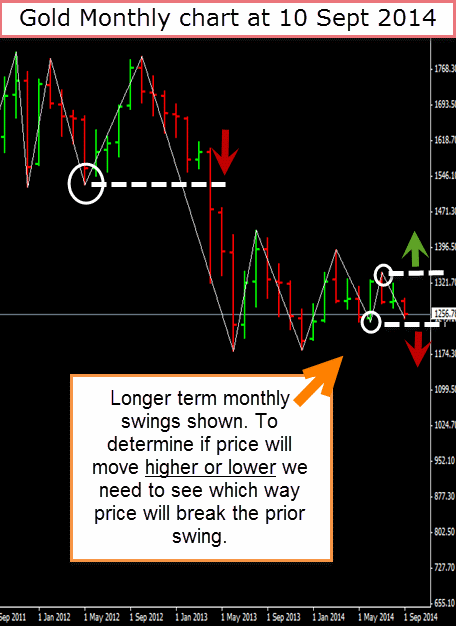 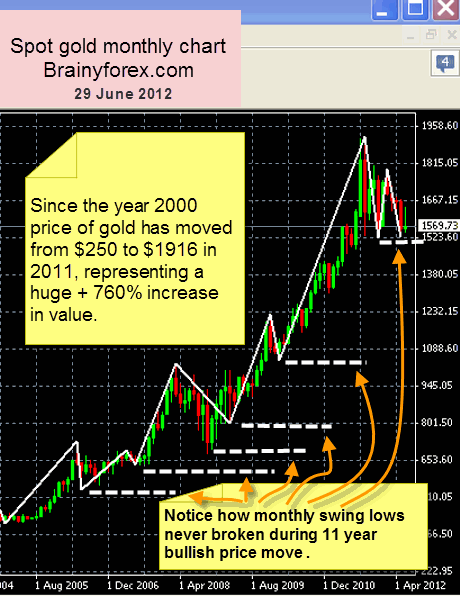 
It's also anticipated that according to WD Gann's master time factor that the 60 year cycle should push gold prices higher from this point forward. The cycle forecast shows that there is a high probability that a retest of the $1,900.00 level may take place about October 2012.


We will have to watch how the swing levels eventuate from this point forward. Especially will the daily swings be of great help showing which direction the precious metal will move.

PS : The article below produced by EWI has some great quotes about how government leaders in charge of the financial system struggle with the movements in the price of gold.

What do the last three chairs of the U.S. Federal Reserve have in common?

Well, it's not their taste in structured black blazers. It's the fact that they all see gold as a kind of Winston Churchill-like nesting doll -- a riddle wrapped in a mystery inside an enigma.

November 2013: At her confirmation hearing, Fed successor Janet Yellen concurred: "I don't think anybody has a very good model of what makes gold prices go up or down."

October 25, 2014: At the New Orleans Investment Conference, former Fed "The Maestro" Alan Greenspan explained that gold's "value as a currency is outside of the policies conducted by governments." (Wall Street Journal)

Translation: Folks, the highly revered institution I used to work for -- the one whose policies are often cited by the mainstream as a "catalyst" for gold prices -- doesn't actually control the marketplace.

But wait! 4 days later, on October 29, Greenspan then told the Council of Foreign Relations that the Fed's $4 trillion balance sheet is a "pile of tinder, but hasn't been lit." Once the central banks stop "sitting on" their reserves, said tinder will ignite, "inflation will eventually have to rise," and in turn, "gold will move higher, measurably so." (FXstreet.com)

Translation: Those policies actually do control the gold market -- it just takes a while for their potency to kick in. Like, say, 5 years of quantitative easing, 10 rate cuts to 0%, and $4 trillion in "inflation"-producing stimulus.

It makes you think: For those supposedly at the helm of where gold prices are going, they sure don't seem know how they got there.

But what if you could know? Not only how gold prices got to where they are, but also why and sometimes even where they are headed before they even turn?

Bernanke, Yellen, Greenspan, they're half right: Gold prices are difficult to understand. And there is no such thing as a 100% fool-proof model to forecasting its price trends. But there is a "good model" -- a great one, in fact: Elliott wave analysis.

Unlike conventional analysis, which looks outside the market for clues to future price action, Elliotticians look on the price charts themselves. There, when volatility doesn't blur the lines, we can detect specific patterns that indicate where prices are likely moving next.

You can use gold's 3-year-long sell-off as a prime example. Back in 2010-2011, gold's bullish "fundamental" picture was allegedly in the bag. The U.S. Federal Reserve just launched its $1-trillion-a-year quantitative easing program, which was widely expected to fuel gold's inflationary fire. An August 25, 2011 Gallup Poll confirmed:

Also this May 10, 2011 Reuters: "Deutsche Bank Eyes $2000 Gold. We believe the main beneficiary of super low interest rates in the U.S., a weak US dollar ... and ongoing questions over the stability of the financial system will be gold."

Elliott Wave International, however, saw a different outcome for gold on the metal's price chart: an impending decline. In the September 2011 Elliott Wave Financial Forecast, our analysis included the following chart, which showed gold prices at or near the end of a decade-long, 5-wave advance.

"Gold's wave structure is consistent with a terminating rise. [Elliott waves progress and therefore top out in 5 waves]. As this monthly chart shows, prices exceeded the upper line of the channel formed by the rally from the 1999 low in what Elliott terms a throw-over. A throw-over occurs at the end of a fifth wave, and represents a final burst of buying. The pattern is confirmed as complete once prices close back under the upper line, which currently crosses $1650."

From its September 2011 peak of $1921.50, gold prices have plunged 30%-plus, hitting a 4-year low on November 3 -- indeed confirming the Elliott set-up of a long-term tradable top the waves warned about three years ago.

An independent perspective like this gives you the opportunity to see financial markets in a radical new light; one that brings you closer to understanding the reason why prices move the way they do, and anticipating those moves before they take place.

Gold: The Big Picture and the Near-Term Outlook
You can better understand gold's price swings when you know the big picture in this precious metal. In these two 5-minute video clips from his presentation at the San Francisco MoneyShow in August 2014, EWI's Chief Market Analyst Steve Hochberg looks at a long-term chart of gold to demonstrate how extreme opinions cause most people, governments and central banks to act on a trend at just the wrong time. He then explains his current analysis, and he offers you his outlook for gold over the coming months. His forecast has already begun to take shape.

This article was syndicated by Elliott Wave International and was originally published under the headline A GREAT Model to Understand Gold's Price Swings. EWI is the world's largest market forecasting firm. Its staff of full-time analysts led by Chartered Market Technician Robert Prechter provides 24-hour-a-day market analysis to institutional and private investors around the world.