This successful day trading system is explained from an interview with Alan Dewett.

Alan Dewett, 60 years of age trades full time for a living from his home in Adelaide South Australia. He aims to achieve 1% profit each and every day as he trades his favorite currency pairs; USD/JPY, EUR/USD & AUD/USD.


Alan aims for 55 pips profit each and every day. Once he obtains them then he stops trading for the day.


Alan was recently interviewed by an organizer of one of the biggest trading competitions in the world as he has been a very popular and active member of the trading club.

In the interview Alan explained that he compounded his profits of 1% each day so that over the year this profit would grow into a full time income. In the last year he was successful in achieving his profit goal.


Counter trend based only on RSI divergence.


From the interview, Alan explains that in his search for a day trading system he was dismayed at all the rubbish trading methods and indicators that were floating around the internet. He believes that most of them are misinformation whereby one person copies another persons system that does not work and so the cycle continues.


Asked how his system works, his reply was that he ONLY uses the standard RSI indicator with a setting of 14. He looks at the 4 hour, 1 hour, 15 minute and 5 minute charts for signs of price divergence as shown on the chart below.


Alan does not enter a position based on the 4 hour chart divergence as he says that a price change can occur too slowly or too far away from his entry point. Instead entries are made from the 15 minute and 5 minute charts. He watches these charts closely as he day trades. With an eye out on these time frames and the three currency pairs there are plenty of divergence opportunities. "It is not a matter of matching the 15 minute and the 5 minute chart together before placing a trade, if there is divergence on the 5 minute chart then enter the position", says Alan.


Alan also mentions that he likes to trade the Yen, Aussie dollar and Euro as these currencies offer the lowest spreads. 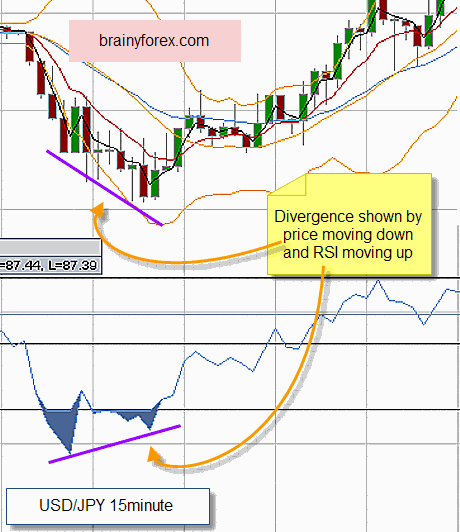 Please note; The above chart is a snapshot from my own trading chart. Alan does not use any moving averages or bollinger bands in his trading system.


Alan ONLY uses the RSI (14) indicator, nothing more.