Forex scams come in many forms. Rob Casey, a stalwart of the Forex Robot EA trading industry shares some free tips on what to watch out for.

Having released many reports and robot optimization techniques in the past like the Rob is no stranger to trading robots. In this article he shares some information about how Forex Robot Scams work.


His intention is to expose the ways some unscrupulous robot vendors are not only destroying peoples trading accounts but also the Forex robot industry's name.


The more people that know about these techniques the harder it will be for them to survive!

In case you missed the first video lesson that Rob released on the 6th January 2011, I have included a summary of the information he presented below;

Rob started the lesson by explaining that the best settings for a forex robot are not necessarily the "default settings" that the vendor recommends to you after you have purchased his robot EA.

The reason for this apparent conflict of interest comes from the pressure exerted by the "marketing people" whom sell or promote the robot. The marketers need to compete with other robot results out there in the market place and need to show exceptional trading results. Hence, the robot is stretched in relation to risk and safety so as to be a hot salable item.

Rob explains that there are many great forex robots out there in the market place, not all are forex scams but they are being sold with the wrong settings. These higher risk settings compromise the trading accounts of buyers by putting them at risk of blowing up. And along with that, a bad reputation for the robot and the industry in general.

Rob also says he knows of marketers or scammers sneaky tricks like opening about 20 live real money accounts with $1,000 each and running them for about six months and then hoping that at least one account is still standing at the end, in which they use to promote the robot EA with full investor access to a real money account. The other 19 unsuccessful accounts which are blown up and destroyed are not mentioned.

Finally Rob also goes on to say that testing a forex robot on a demo account is good so as to weed out the outright forex scam robots and also to understand the trading characteristics of the particular robot.

He also recommends that buyers of forex robots should reduce the risk settings that the robot comes with when bought and better still to learn how to optimize the settings yourself, which he says is easier than most people think. 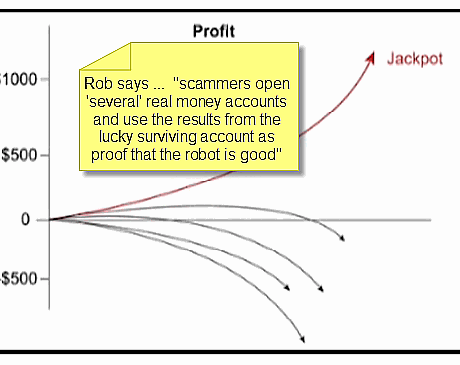 In Rob's second lesson he says that forex robots need to be optimized on a continual basis to take into account changing market conditions.

Rob says that this is the reason why robots stop working after a short period of time after they have been purchased. Because they are optimized at the time of sale, but then fall out of market sync, as he calls it. 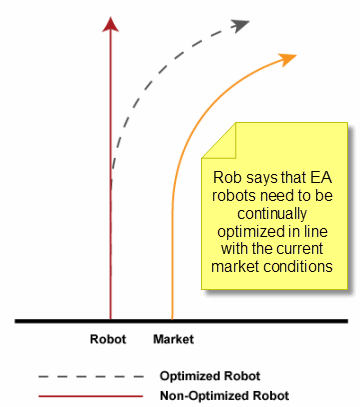 Rob explains that backtests need to be done with a very high modeling quality of data, near 99%.

As seen from the graphic below MT4 software provides backtest users with a model quality rating based on a percentage. The first one shows 90% modeling quality while the second shows 99%.

Backtest results will show different results based on the accuracy of the data tested. So there could be huge differences in test results between 90% vs 99% modeling quality.

Rob also bought out that there is misinformation being spread about the usefulness of backtesting. Backtesting has its place when done correctly. Every robot developer uses backtesting to some degree. 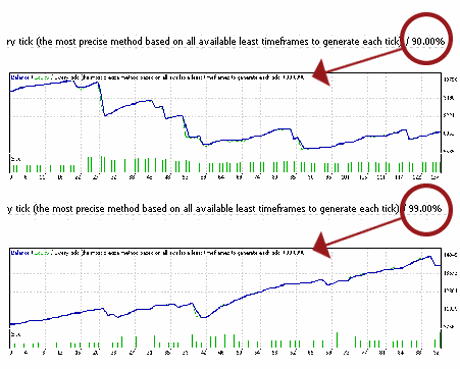 Continue to learn more on how to properly optimize a forex robot ea, by reading Rob Casey's article here.