Sorry - Abes Forex Signals is no longer in operation.


It's been almost one month since I requested (14 August 2012) to complete a further review of Abe's signals through his (TRADE COPIER SERVICE) but have not received a reply from Abe as of today the 10th September 2012.


As I had been unsuccessful in my first review to produce profitable trading results by manually entering his trades (read below) based upon following Abe's broadcast signals service I thought it appropriate to request a copy of Abe's new TRADE COPIER SERVICE through the Metatrader platform but have not heard back from him.


I am not sure why Abe has not responded to my earlier emails about further testing and not sure about his reasons for keeping his open trades hidden? The main problem with hiding open trades is that trading statistics are shown better than they really are. A common practice of novice traders is to hold onto losing trades and "wait" for them to turn around into profit. At least the novice trader knows what they are. As for people whom would like to track Abe's trading performance it is not really possible as nobody but Abe knows what his open trades are. The reporting statistics do not include these open trades in the reporting statistics and hence it is beneficial for these losing trades to be excluded. [Good for Abe but not good for others].


My main concern with Abe's hidden floating trades relates to his Automated Trading Robot. I have noticed that many of these (hidden) open trades are open for a long time and they also carry a rather large stop loss of many hundred pips. Hence, the overall results for the signal service may not be represented accurately. 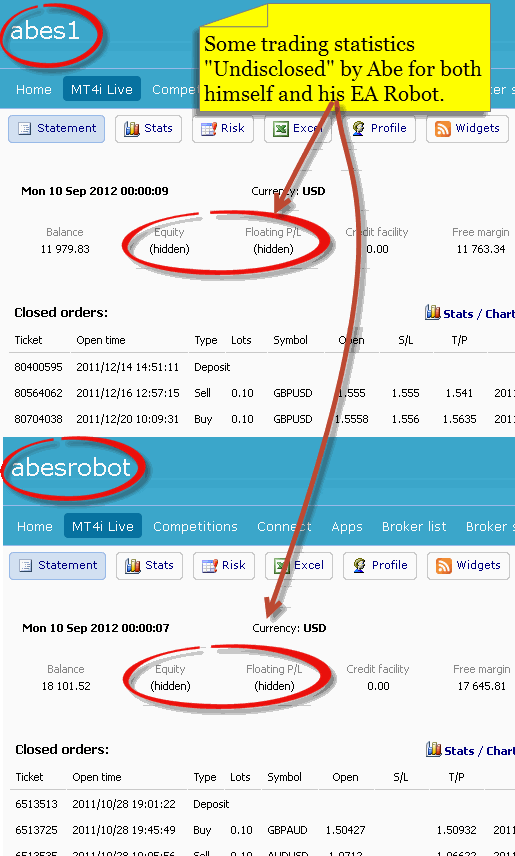 
I came across Abe through a recommendation from a high profile forex trader / educator Vladimir Ribakov (Also a signal provider, see our signal review page). Abe came very highly recommended and now after two weeks of testing his signals I can see how good he is.

During the last two weeks I have logged into Abe's members area and obtained his signals and manually placed them into my FBS account. I used no discretion at all before placing the recommended trades. If Abe said "buy now", I bought. If he said place a "sell limit order", I did just that.


As I live on the other side of the world from Abe sometimes I miss his signals or updates. That's where his mirror service comes in handy whereby all trades are copied exactly into your account from Abe's.

The results for the prior two weeks have been pretty good. First trade taken was on the 18th January 2012 on my FBS $10,000 account. At 5 lots per each trade the account balance is $23,890.24. That is 274 pips profit. Eleven trades in total which includes two break even trades and one loss trade.


[I decided to emphasize the profit or loss from the trades by using 5 lots and would not recommend using such a high lot size].


Even though the FBS account is a demo, several of the trades that I entered were placed late as I only check the members area or email every few hours.


After the first two week winning period came the losing streak. I stayed with the same 5 lot amount per each and every trade. Unfortunately I could not close some of the trades as early as Abe had recommended as I live in another time zone to him. This meant that using the 5 lot amount ended up causing a large draw down on my account. The nail in the coffin for my account was when I took a ROBOT signal (that I was not testing) by accident and this went against me and caused the whole account to blow up.


I would not recommend taking trades manually and leaving them open without instant notification of change in trade status.


For those whom would like to give Abe's signals a try I would recommend using the mirror service so Abe can amend stop loss orders and profit targets etc automatically when he sends the signals through his account.

Also check out the public review page and find out what other forex traders are saying about Abe's service here.

During my testing of Abe's forex signals I notice that he places the initial stop loss between 15 to 60 pips away from entry with a profit target of about 2.5 times the risk. He then watches the market closely as the position starts and then moves up his stop loss to his entry point. If he sees that the market is not acting the way it should he then exits the position with a smaller profit.


That's what I like about Abe's style of trading and can see where he gets his consistent results - from his conscientious monitoring of the risk per trade. He is a good at managing risk.


From looking at the charts where he places his orders I assume he uses weekly support and resistance levels for his trading strategy?


A look inside Abe's members area

We will now take a look inside the members area.


Once you join his forex signal service you will receive a membership login id and password. Once you log in you will be greeted with the following screens as shown below; 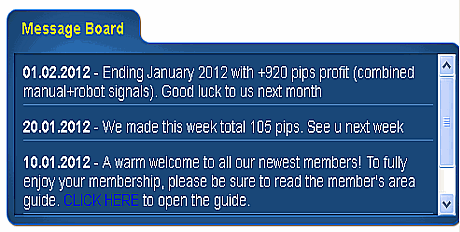 The next screenshot shows how the signals are displayed to those logging into the dashboard. Signals are also sent through email.


By clicking on the "green plus tab & arrow" on the right hand side a new window is opened explaining the signal and updates to the signal in more detail. 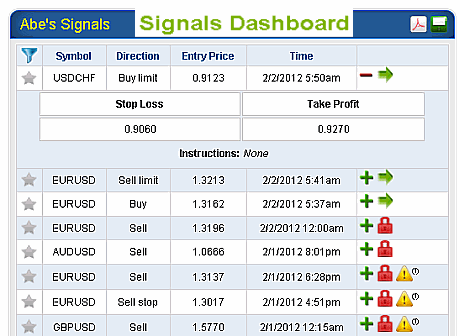 Next, we see the live webcam which shows the trading screens of Abe and also his robot.

Members can choose if they would like the robots signals or Abe's or both.

Just be mindful that Abe's forex robot is programmed with a 600 pips stop loss which if triggered at the start of a clients account would not be much fun. Abe does say that the stop loss does get hit every few years. Personally, I would gain profits first with Abe's personal trading and then apply some of those profits for the robot to trade. 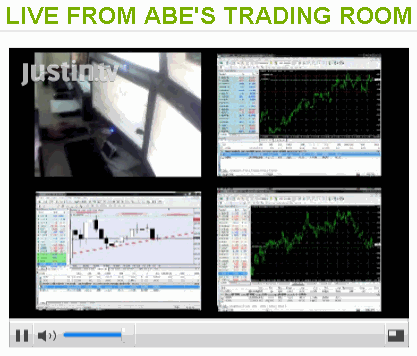 Abe's first message to members since starting his service

Below is a copy of Abe's first newsletter since he opened his forex signal service to the general public;

The first month of my new signals service has been exciting, and we all got to know each other, got used to the tech stuff around and feeling comfortable.


Remember, I'm here for the long run, and my goal is to continue producing consistent trading results.


What does "consistent results" mean? A nice up rising account graph for all of us!


In the attachment to this email you can see the graphs of the MT4 master account that I use for my manual signals (for the trade copier) and robot signals. See how it is rising nicely? That's the way I like it!!


Thank you for being a loyal follower, and taking part in the signals service which I'm very proud of!

As mentioned above I would only recommend Abe's service through his mirror service so as to catch all the trades and amendments to open positions.


Not sure about his 600 pip stop loss strategy robot? I would like to see Abe come up with a automated strategy that reduces this large stop loss. At this early stage I don't think I would be brave enough to utilize his robot's signals.


For non-mirror users maybe another option would be to receive sms alerts to their phone which would just be a matter of having a separate email address directed to the mobile phone, which would alert a person to the trades and updates. Trades can then even be entered through the phone, but with the mirror service why not have it all fully automated?


Even though I blew up my testing account I still say a "well done" to Abe! I take full responsibility for my bad money management which caused my account to double in two weeks and then blow up the next. I also did not close or cancel orders straight away as recommended by Abe. I also entered a losing trade that he did not recommend as I got it mixed up with his robot signals. My FBS forex broker account did not have "commodities or index" available either thus only being able to enter "currency trades" Bad boy me :-(


Into the future I will test Abe's signal service again, but next time I will have it setup through the TRADE MIRROR SERVICE.


Fritz
brainyforex.com Also visit the public review page. Find out what other forex traders are saying about Abe's service here.