Gann theory put to the test

It should be noted that some people claim that WD Gann was a bit of a scam and that William Delbert Gann should not be trusted. Apparently his son John Gann had a falling out with his dad and has said that his dad's estate, including house after he died in 1955 was only about $100,000?

John claims that his dad could not support himself and his family by trading and would thus sell trading educational materials.

The thing we need to ask in such a situation in which a family member has had a fall out with another family member, is whom is telling the truth? Is John slandering his dad because he was cut out of his fathers will or most of it?

When we look at some apparent evidence we notice that William was tested by outside persons watching him trade and noted that the Magazine The Ticker and Investment Digest December, 1909 ran an article on William D Gann with the heading , An Operator Whose Science and Ability Place Him in the Front Rank - His Remarkable Predictions and Trading Record. Which mentions that Mr Gann gave them in advance forecasts of exact points at which certain stocks and commodities would sell, together with prices close to the then prevailing figures which would not be touched. And also, During the month of October, 1909, in twenty-five market days, Mr Gann made in the presence of a representative of 'The Ticker Digest' two hundred and eighty-six transactions in various stocks, on both the long and short side of the market. Two hundred and sixty-four of these transactions resulted in profits : twenty-two in losses. Read more here.

Then there some questions like; why would his life size picture hang in the entrance of the New York Stock Exchange? Was he really one of the first to own his own private aeroplane? Why would he employ about twenty five people to draw up charts for him (Before the computer age when charts were not readily available). Why are there numerous software companies today advocating his special charting styles? How could Mr Gann sell trading courses for the price of houses back in his day? How could he sell his market forecast newsletter with advance price predictions, years in advance?

As we see Mr Gann's sons allegations don't really stack up? Or do they? Maybe there is a logical explaination for John's claims?

Whatever the case, let us now as of today 21 November 2019, see if we can prove William Delbert Gann a skilled market analyst or prove him not so good by analyzing the S&P 500 chart.

On our S&P 500 stock market below, we now notice that both the 90 year and 10 year cycles as well as the doubling of the prior price range have now activated. Hence, according to Gann theory the stock market should have a very high probability of reversing from very close to these current levels. 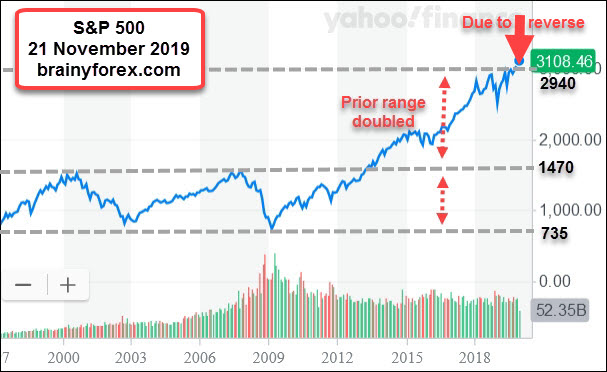 Gann theory predicts a stock market crash soon. Due to the 90 time year cycle and 10 year cycle being active and a doubling of the previous price range.

There are more elements to Gann theory but the 90 year time cycle and the 10 year cycle as well as the doubling of the prior price range (735 to 1470 and then to 2,940) are certainly his most powerful trend reversal prediction techniques.

Mr Gann also said there are no certainties with market predictions and some cycles can come early or late. So please don't sell your grand mothers house on this forecast as this information is only of an educational nature and according to his son his work is not that great.

So now at least we will get a better idea if WD Gann's technical analysis skills are good or not by watching over the next months to see what happens next?

The same charting techniques would also be applicable for forex or commodity traders as they are based upon human behavior as represented through geometry.

If you have any trading friends or relatives, please pass on this article to warn them of a possible top around now in the stock market and that they should not be buying stocks according to Gann theory. He would recommend that we sell all the shares we hold and try to profit from the anticipated falling market by short selling certain stocks or using certain options strategies.

WD Gann also warned people not to get ahead of the markets. He said to wait and see if the market is going to turn first. A technique which helps is to see if price moves under the prior weeks low or under the prior months low - as these indicate a weak market. He also recommended using trend lines - 45 degrees being the most important once broken. These trend lines have not been used on the above chart, which is a limitation to his recommendations of using all of his charting techniques in unisome.

Look forward to comments in the comment section below.