How scalping the forex market works

Scalping the markets before the advent of automated trading systems required lots of patients and determination to succeed.


For those unfamiliar with what it means to 'scalp' the markets, it means to buy and sell on a very short term time basis. A trade may be opened and closed in a matter of seconds or minutes. The trader aims to capture lots of small price moves. Success is obtained by achieving a high percentage of winning trades along with a large quantity of trades.


For example say the forex trader scalps 7 pips per trade, 9 times per day with a 90% success rate then success would be achieved if the 10% unsuccessful trades was less than the total of the winning trades.


Lets look at the numbers, they work out as follows;


Assuming this system was consistent and produced 10 trades each day at the end of the week the forex trader would walk away with + 165 pips net profit.


It seems that most scalping systems are not successful in the long term because the maths in the design of the system is not correct to start with. The main problem observed with scalping ea robot systems is that the stop loss value is too large. In our above example, lets assume the system had a stop loss of 200 pips instead of 30 pips. This would render the trading system a loser. If everything else remained constant, at the end of the week the trader would walk away with a loss of – 137 pips. Only because of one loss! "The one that got away!" (63 pips won, 200 pips lost = -137 pips).


Read more about the maths behind a winning forex trading system here.

How some traders scalp the markets


Implementing short term trading strategies is only limited by your own ingenuity and imagination. Try an indicator and combine a candlestick pattern and test the result. More fine tuning can be done to limit too many bad trades. It's just a matter of testing and retesting and learning from the results.


The chart below is the EURUSD 1 minute time frame. Notice how price bounces between the upper and lower bollinger bands. There are plenty of successful systems that include bollinger bands along with other indicators or price patterns to confirm an entry or exit signal.


Notice on the chart how success rates can be improved by waiting for a bullish candle to appear before entering a long position once price reaches the lower bollinger band. The same rule applies, but opposite for shorting the market or closing a long position.

Another type of trading strategy is represented on the chart below. This time a (short) position is based on the appearance of a doji candle (open & close price the same) and a bearish candle. Read more about candlesticks here.

The idea is to wait for a reversal against the trend and then enter a position to continue with the dominant trend. The moving averages show the trend direction. This is known as "shorting the rallies".


But when do you take your profits? Some traders may decide to exit the position after two price bars. That's it. They just wait for two more candles or bars and then exit the trade with what-ever profit exits at that time.


Other traders take profits after a predetermined number of pips. Say 15 or 10 or even 5 pips.


Yet again, others choose to wait for the prior period candle to be exceeded before closing for profit. That way they have a better opportunity of riding the trend that little bit further. 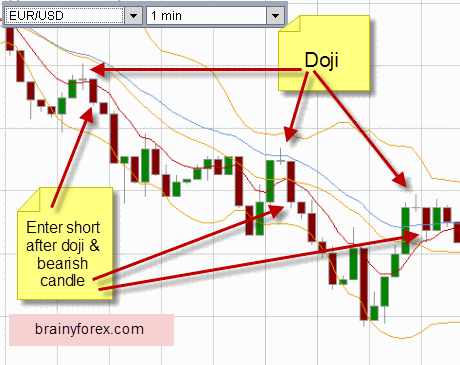 
Should you desire to start a career as a scalper, remember that sitting in front of a computer screen all day or all night watching price patterns is exhausting. I personally believe that the better option to follow would be to create a quality trading ea robot. That way the robot will be able to catch all the trading signals 24 hours a day, five days a week. If your system is good, you should not fear entering each and every trade that fits the entry signals. Have a read what WD Gann thought was the weakest element in trading here.

I believe a lot of traders are worried about handing over the decisions to buy and sell to a computer program because they fear something could go wrong with the execution or some other error along the way. They prefer to have complete control and use human judgment before opening or closing a position on the market.

What Do You Think About This Trading Method?

What are your thoughts? Have you tried this strategy?